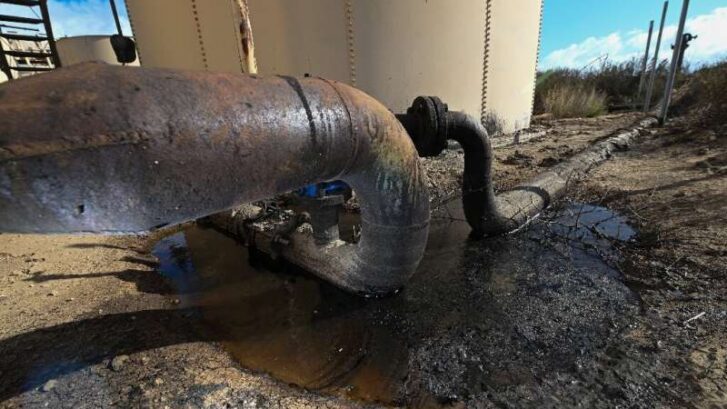 Re-post of article from phys.org

California plugs a few dozen per-year, according to the Interstate Oil and Gas Compact Commission (IOGCC), and is currently in the process of sealing 56 near the city of Santa Clarita, just north of Los Angeles, some of which date back to 1949.

Bill Suan bought his family’s cattle farm in the mountains of West Virginia a decade-and-a-half ago with little thought for the two gas wells drilled on the property—but then they started leaking oil onto his fields and sickening his cows.

After taking the operator to court, Suan was successful in plugging one well, but the company has since disappeared, leaving him to contend with a small-scale environmental disaster that’s a symptom of the larger problem of orphaned oil wells across the United States.

“It’s shocking to think that it was like that for decades,” Suan said.

Since the first commercial barrel of oil was extracted in Pennsylvania in 1859, the United States has been at the center of global petroleum production.

But in many US states, it took more than a century to pass regulations governing record-keeping for wells and their sealing, or plugging.

Today, the exact number of abandoned wells nationwide is unknown, but the Environmental Protection Agency this year estimated it to be around 3.5 million.

The EDF estimates around nine million Americans live within a mile of a well that’s considered orphaned, meaning that it’s neither operating, nor has a documented owner.

“A lot of the infrastructure that was built, that was now abandoned… is very much centered around poor communities,” said Gustavo Aguirre Jr., the network’s director in the county.

From rural areas in the east where modern oil production began to cities in southern California, where pumpjacks loom not far from homes, the United States is pockmarked with perhaps millions of oil wells that are unsealed, haven’t produced in decades, and sometimes do not have an identifiable owner.

The detritus of lax regulation and the petroleum industry’s booms and busts, many states have struggled to deal with these wells, which can leak oil and brine into water supplies as well as emit methane, a particularly potent greenhouse gas.

In a first, Washington is making a concerted effort to plug these wells through a $4.7 billion fund, passed as part of an expansive overhaul of the nation’s infrastructure.

“The money available to the states (has) never been commensurate to the scale of the problem, and now for the first time it will be,” said Adam Peltz, a senior attorney at the Environmental Defense Fund (EDF) nonprofit.

The funds will likely not be enough to solve the problem entirely, though, and environmentalists warn that the patchwork of state laws governing oil production include many loopholes that could allow companies to continue abandoning wells.

States have largely been left to their own devices when it comes to addressing these wells.

California plugs a few dozen per-year, according to the Interstate Oil and Gas Compact Commission (IOGCC), and is currently in the process of sealing 56 near the city of Santa Clarita, just north of Los Angeles, some of which date back to 1949.

The bulk of America’s orphaned wells are thought to be in eastern states where the industry was born, and where more than 160 years later, it’s not unheard of for landowners to find a hole in the ground or a pipe protruding from the earth that’s leaking oil or brine.

Pennsylvania, which is thought to have the most, plugged 18 orphaned wells in 2020, according to the IOGCC. In the same year, West Virginia, which has thousands of documented orphaned wells, plugged one.

“It’s been decades of neglect, just letting them get away with it, not forcing the plugging regulations,” said Suan, who has had to fence off the unplugged well on his land to keep cattle from getting into the leaked oil.

“And now we’re stuck with all of them.”