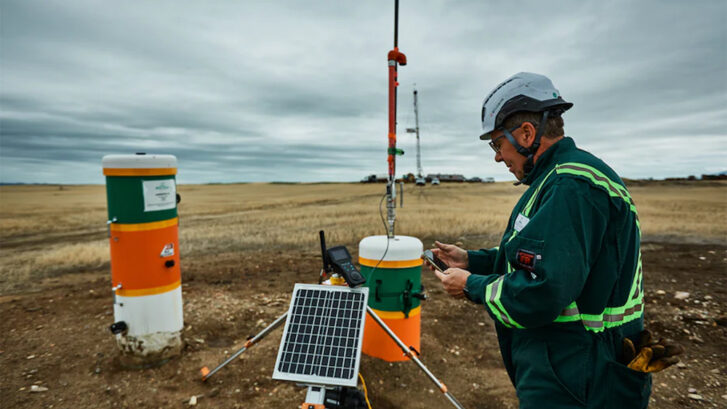 Image Above:  Curtis Shuck, founder of Well Done Foundation, a nonprofit organization based in Bozeman, Mont., that caps abandoned oil and gas wells, observes measurements of leaking methane gas from a capped oil well in June near Shelby, Mont. (Adrián Sánchez-Gonzalez for The Washington Post)

The White House on Monday announced new steps to help curb emissions of methane, saying it will send $1.15 billion to states to clean up thousands of orphaned oil and gas wells that leak the powerful planet-warming gas.

The Biden administration also outlined plans to enforce requirements for pipeline operators to minimize methane leaks, undertake research to reduce methane emissions from beef and dairy systems, and form an interagency working group to measure and report greenhouse gases around the nation.

Interior Secretary Deb Haaland said in a statement that the new funding “is enabling us to confront the legacy pollution and long-standing environmental injustices” that have long plagued vulnerable communities. “This is good for our climate, for the health of our communities, and for American workers,” Haaland said.

Tens of thousands of abandoned wells dot the country in places where the oil and gas companies or individual owners went out of business, or are otherwise no longer responsible for their cleanup.

The Interior Department reported earlier this month that there are 130,000 documented abandoned wells across the country. And an analysis by the Environmental Defense Fund and McGill University found that about 9 million people in the United States live within a mile of an orphaned well. As recently as 2018, the Environmental Protection Agency estimated that the number of wells could actually be as high as 2 million to 3 million.

“Some might be relatively harmless, and some might be quite dangerous,” said Mary Kang, a researcher at McGill University in Canada who has long studied the problem. The wells can emit a range of gases, she said, including methane, which is the primary component of natural gas. In its first 20 years in the atmosphere, methane has more than 80 times the warming potential than that of carbon dioxide.

“It’s a pretty big problem that’s flown under the radar for a long time,” said Adam Peltz, a senior attorney with the Environmental Defense Fund who also worked on the analysis. He called the White House’s move “a down payment on this problem.”

The $1.15 billion announced Monday is the first tranche of allotments from the $4.7 billion that Congress approved for orphaned well cleanup as part of the fall’s bipartisan infrastructure package. That package also included more than $11 billion in funding for abandoned mine reclamation and $1 billion for modernizing natural gas pipelines, among other measures.

The funds will go to the 26 states that submitted notices of intent to the Interior Department late last year. The allocations range from about $25 million for Alabama, up to $107 million for Texas. More will be spent in the coming months and years as part of grants to states.