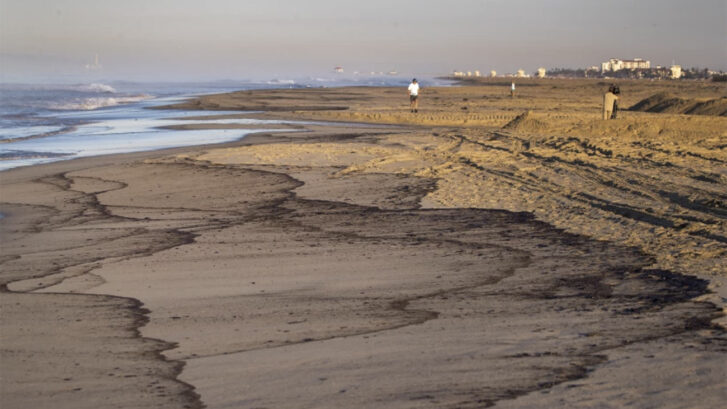 Two cargo ships that allegedly dragged an oil pipeline with their anchors during a winter storm should be held liable for a disastrous October oil spill that sent thousands of gallons of crude into the waters off Orange County, the operator of the ruptured pipeline said in a lawsuit filed Monday.

In a 35-page complaint filed in federal court, Houston-based Amplify Energy Corp. accused two shipping companies and their subsidiaries — based in Switzerland, Panama, Liberia and Greece — of improperly allowing their cargo ships to drop anchor near the pipeline and of failing to notify authorities after the damage occurred.

Without the presence of the cargo ship anchors, “the pipeline would not have been displaced or damaged and thus would not have failed,” Amplify said in the complaint.

The Marine Exchange of Southern California, which monitors and directs traffic in the busy San Pedro Bay, was also named as a defendant in the lawsuit. The nonprofit should have been aware of the anchor drags and should have notified the company, the lawsuit said.

The lawsuit also names as defendants the captains and crews of the two cargo ships, the MSC Danit and the Cosco Beijing.

The Coast Guard has designated both ships parties of interest in the federal investigation of the spill, which sent at least 25,000 gallons of crude gushing into the waters off Orange County. An anchor striking and dragging the pipeline could have made the conduit more vulnerable to other damage or to environmental stressors, the Coast Guard said.

Amplify’s lawsuit said that, if company employees had been aware of the damage, they would have deployed a remotely operated vehicle to inspect the pipeline, “detected its dislocation and the damage done to it, suspended operations immediately, and undertaken remedial measures that would have prevented the discharge of oil.”

“We would have immediately assessed the situation and made any necessary repairs,” company spokeswoman Amy Conway said in a statement Monday.

After warnings of an approaching storm on Jan. 25, 2021, more than 20 container ships left their anchorages in San Pedro Bay and headed to deeper waters to ride out the storm, the lawsuit said. But the Danit and the Beijing remained near the pipeline, the complaint said.

Driven by winds of up to 63 mph and waves of up to 17 feet, both ships — which are longer than a downtown skyscraper — dragged their anchors across the seafloor “and into areas where federal law prohibits anchoring,” the complaint said.

Movement data from the Danit shows the ship began “moving erratically” while broadcasting that it was at anchor, and “zig-zagged” over the pipeline repeatedly over a three-hour period, the lawsuit said.

As the Danit prepared to raise its anchor and head to deeper waters, the Beijing came within about 560 feet of colliding with the other ship, the lawsuit said, citing November court filings by the Dordellas Finance Corp., the Panamanian company that owns the Danit.

The Danit “ceased its anchor-raising operations and took action to avoid a collision” with the Beijing, the lawsuit said. The Danit’s crew eventually sailed away without notifying authorities of any damage, while the Beijing remained at anchor near the pipeline, the lawsuit said.

Given the “proximity between the ships, the length of the chains typically used to anchor such vessels,” and the Beijing’s movements in the area, Amplify alleged that the Beijing also dragged its anchor across the pipeline.

The lawsuit accused both shipping companies of negligence. When a vessel strikes a stationary object, courts presume the vessel is at fault, the lawsuit said.

Amplify is seeking punitive damages, as well as reimbursement for legal fees, the bill to repair and replace the ruptured portions of the pipeline, and the revenue lost while the pipeline has been inoperable.

Amplify is also pushing to require the Marine Exchange to notify owners of undersea property of any potential anchor drags within 24 hours of the incident.

The company also wants the Marine Exchange to block ships from anchoring in areas immediately adjacent to the pipeline when bad weather is likely, writing that “significant vessel traffic and congestion … combined with the ever-present threat of heavy weather, make future anchor-dragging incidents reasonably likely.”

Read the complete article at latimes.om