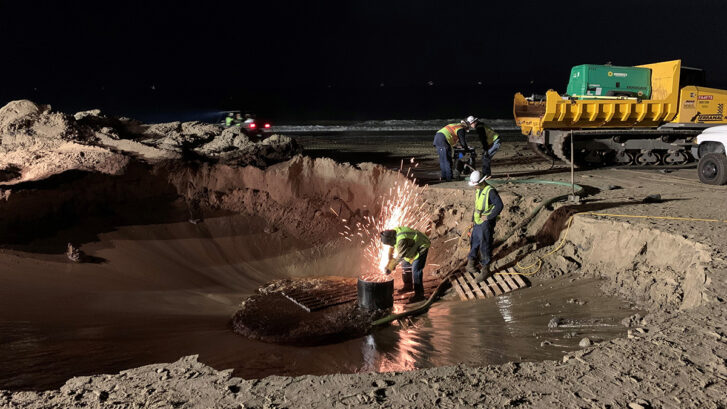 An oil and gas state abandonment is the plugging and abandonment (permanent closure and sealing) of an orphan or deserted (or potentially deserted) oil and gas well through a state contract. Because the wells concerned are orphan or deserted, they do not have a financially solvent, responsible operator. Where there is a financially solvent, responsible operator, CalGEM will first pursue a plug and abandonment at the operator’s expense.​

​Process for Safely Plugging and Abandoning WellsA well is plugged by placing cement in the well​bore or casing at certain intervals, as specified in California laws or regulations. The purpose of the cement is to seal the well-bore or casing and prevent fluid from migrating between underground rock layers.

Cement plugs are required to be placed across the oil or gas reservoir (zone plug), across the base-of-fresh-water (BFW plug), and at the surface (surface plug). Other cement plugs may be required at the bottom of a string of open casing (shoe plug), on top of tools that may become stuck down hole (junk plug), on top of cut casing (stub plug), or anywhere else where a cement plug may be needed. Also, the hole is filled with drilling mud to help prevent the migration of fluids.​

​There are four sources of funds used for state abandonments: