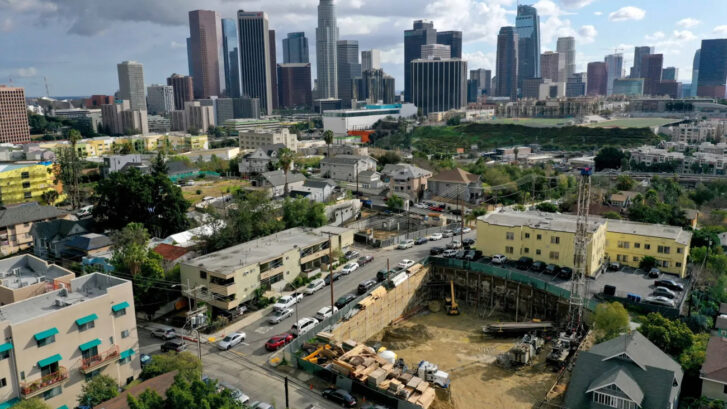 Re-post from The Los Angeles Times

Thick oil was once so abundant beneath Southern California that it bubbled to the surface, most famously at the La Brea Tar Pits.

But after more than a century of aggressive drilling by fossil fuel companies, most of Los Angeles’ profitable oil is gone. What remains is a costly legacy: nearly 1,000 wells across the city, in rich and poor neighborhoods, deserted by their owners and left to the state to clean, according to a first-of-its-kind analysis of state records by the Los Angeles Times and the Center for Public Integrity.

Few U.S. cities are punctured with such a concentration of old drilling sites, with tens of thousands of residents living nearby, from Ladera Heights to Echo Park. If not plugged and cleaned up, many of these orphaned wells will continue to expose people to toxic gases, complicate redevelopment and pose rare but serious threats of explosions. If the state were to tackle the cleanup, it would cost tens of millions of dollars.

Yet despite regulatory powers that in some ways are stronger than the state’s, Los Angeles has been slow and inconsistent in forcing the industry to take responsibility for its leaky legacy, according to the Times/Public Integrity investigation.

Part of the problem is staffing.

Until recently, the city Fire Department was operating with one full-time well inspector, resulting in sporadic enforcement.

The department issued notices of violations for extended inactivity to two companies in 2009, then three in 2016, according to the results of a public records request. Then, in 2018, the department inspected wells all across the city, handing out notices to more companies covering dozens of wells.

Battalion Chief James Hayden, whose responsibilities include the Los Angeles Fire Department’s oil and gas program, acknowledged that the city hadn’t provided adequate oversight of the industry. But with a second full-time inspector added this year and other employees trained to conduct additional inspections, he said, the department will work to ensure that operators “adequately manage their idle wells.”

Even as it adds personnel, Los Angeles has been hesitant to use its full regulatory authority, which allows the city to mandate that an oil or gas well either be restarted or shuttered after it sits unused for a year.

Tidelands Oil Production Co. is one firm that has skirted such cleanups.

A subsidiary of drilling company California Resources Corp., Tidelands operates wells in Wilmington, some of which have been idle since the 1990s. Although the city issued violation notices in 2018, Tidelands neither restarted production nor plugged and cleaned the wells.

Asked why, a CRC spokeswoman said by email that the company provided officials with information about the status of its wells “and we understand that the City is evaluating that information.” Hayden said Los Angeles lacks an appeals process for companies cited for violations and has chosen to defer to less-stringent state regulations.

Many neighbors of the city’s old drilling sites are frustrated and angered by what they see as official indifference toward orphaned wells.

“What’s going to happen to them?” asked Danny Luna, who lives in Echo Park, where hundreds of wells sit orphaned, many for more than a century. “Nobody’s taking responsibility for them. … Are we going to be left with leaky faucets underground?”

In addition, Los Angeles has failed to consistently employ a full-time petroleum administrator as city code requires. For decades, the position was unoccupied or filled by part-time employees. In 2016, Mayor Eric Garcetti appointed Uduak-Joe Ntuk, who helped initiate the spurt of oil and gas inspections.

Ntuk departed in late 2019 to run the state agency that regulates oil production, the California Geologic Energy Management Division, or CalGEM. The city has yet to hire a new petroleum regulator, relying on an interim administrator.

Statewide, 2,425 oil and gas wells are deserted and unplugged, a Times/Public Integrity analysis found. More than half of these sites sit in Los Angeles County, mostly between Dodger Stadium and Koreatown. They haven’t produced in at least eight years — many for more than a century.

Until wells are properly cleaned and plugged, they pose a threat to communities and the environment. Idled and deserted wells can waft fumes into homes, emit climate-warming methane, leak salty water into aquifers and drip oil.

Many of these wells were deserted decades ago, during the early chapters of Southern California’s oil history.

Historically, “if a well dried or it didn’t produce anything, they’d throw a few logs down it and walk away,” said state Sen. Hannah-Beth Jackson, a Santa Barbara Democrat who has sponsored legislation addressing oil and gas cleanup. “And to this day we’ve been experiencing the kind of seepage that’s occurred because they haven’t been properly capped.”

Old wells also pose a risk of blowouts — and in extreme cases, explosions.

In January 2019, a 1930s-vintage oil well erupted in Marina del Rey, where a hotel was under construction. No one was injured, but residents and pedestrians captured video of oil, gas, drilling mud and other debris blasted into the sky.

In 1985, something ignited methane rising from a heavily drilled area near the La Brea Tar Pits and Museum. The explosion blew up part of a Ross Dress for Less store, injuring 23 people. Researchers never fully settled the debate about whether the explosion was caused by naturally migrating gas or old wells. Still, the blast reflects the dangers of a city underlain by about 5,200 historical oil and gas wells and miles of associated pipelines.

Los Angeles sits atop “one of the most petroleum-dense basins on the planet,” said Seth Shonkoff, executive director of the research group PSE Healthy Energy, adding that old wells can act as conduits for gas. “Migration of methane and other hydrocarbons creates explosion hazards, which oftentimes need to be mitigated in the basements of houses and buildings.”

Read the complete article at latimes.com