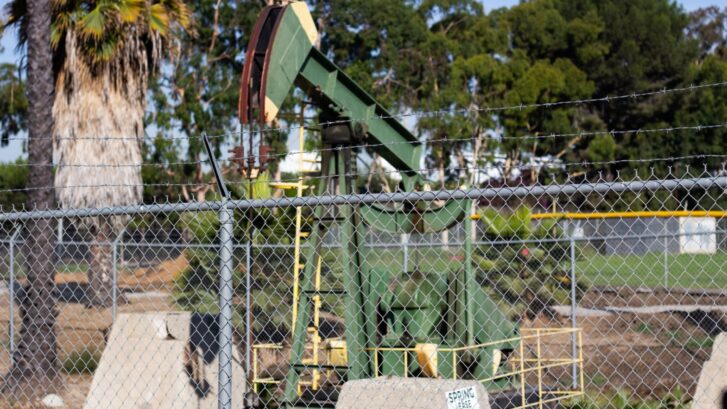 Re-post of original article from The Press Telegram

There are a total of 5,000 oil wells statewide eligible for a portion of the $4.7 billion in remediation funding through the infrastructure bill, according to Uduak-Joe Ntuk, California’s Oil and Gas Supervisor.

There are a total of 5,000 oil wells identified statewide eligible for a portion of the $4.7 billion in remediation funding through the infrastructure bill, according to Uduak-Joe Ntuk, California’s Oil and Gas Supervisor. His agency, the California Geologic Energy Management Division, is working to submit an application for the funding. The state will be competing with about 30 other states for portions of the funds, he said.

Haaland noted that Los Angeles County has “one of the highest concentrations of oil and gas wells of any city in the entire country, with some recent estimates suggesting that 500,000 people in L.A. live within half a mile of a well.”

“I’ve spent the day seeing firsthand how legacy pollution impacts people in the neighborhoods they live in. Kids who are relegated to having baseball practice next to oil pump jacks and gas wells, children who have grown up with bloody noses and the loss of the adults in their lives to cancer,” Haaland said.

“These wells can have serious impacts on the health and well-being of the community and the planet, from contaminating groundwater to seeping toxic chemicals and methane gases. That’s not acceptable,” she added.

Los Angeles County has about 1,400 wells identified for potential remediation funding. Councilman Mitch O’Farrell, who chairs the City Council’s Energy, Climate change, Environmental Justice and River Committee, said the city will submit a “very detailed plan” to the state on remediating its wells.

Orphaned wells can leak hydrocarbons and methane, and remediation funding would allow the state to cut the wellheads off, fill the wells with cement and remove tanks, vessels and pipelines. After that, the soil would be cleaned and tested. The remediation process can cost as little as $15,000 for individual wells in rural areas and as much as $500,000 for wells in urban areas like Los Angeles, which are typically older, Ntuk said.

“It’s a unique opportunity and arguably one of the largest investments in the environment in a generation,” Ntuk said. “We’ll be able to reduce methane emissions from these well, we’ll be able to protect groundwater, we’re also going to be able to create local jobs that pay well.”

Garcetti said the city would apply for the federal remediation funding frequently to address the rest of its idle wells.

Read the complete original article from The Press Telegram

Starting in the 3rd quarter of 2021 Terra-Petra saw a significant uptick in oil well abandonment projects that we are being asked to bid on. There are multiple steps involved with abandoning an oil well (orphaned or not). Initially we engage the California Department of Conservation, Geologic Energy Management Division (CalGEM) to start the Construction Site Well Review (CSWR) application process.

The CSWR is used to assist local permitting agencies in identifying and reviewing the status of wells that are located near or beneath structures. Simultaneously Terra-Petra’s Petroleum Engineering team starts the well abandonment permit process by reviewing the historic well files and preparing the permit package for submittal to CalGEM for review and approval. This process can take anywhere from 3 to 5 months. Once we have permits in hand, we can move into the physical abandonment process. Terra-Petra may spend between 2-5 weeks abandoning a single oil well with one of many abandonment rigs.

Later this year (2nd quarter 2022) we are looking to abandon wells in Redondo Beach and multiple sites in Torrance (pending permit issuance). We are currently consulting on oil well related matters for more than two dozen developments having an oil well on the property.