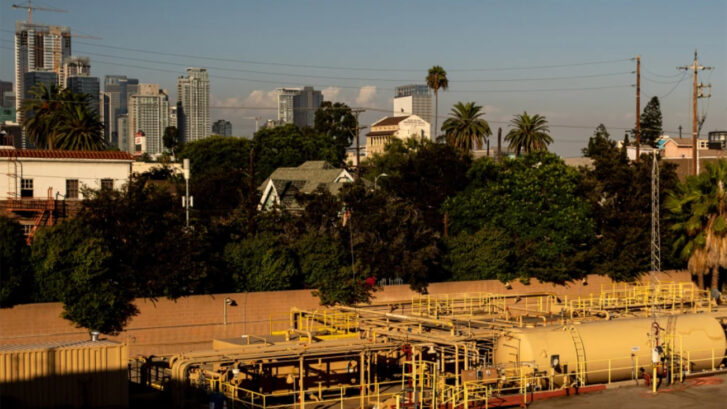 The Los Angeles City Council on Wednesday took steps intended to phase out oil drilling and gas extraction in the city, moving to address the legacy of environmental and health problems caused by an industry that helped create modern Southern California.

The council voted unanimously to support a ban on new oil wells and ordered a study intended to help city officials determine how to phase out existing wells in the next two decades.

Environmental justice activists heralded the vote as long-fought win for the low-income communities of color near the wells and a turning point in city regulations that allow for the extraction of oil and gas in residential neighborhoods.

“No community should be a sacrifice zone,” said Martha Dina Arguello, executive director of Physicians for Social Responsibility-L.A. and co-chair of a coalition of community groups fighting to shut down wells.

Oil wells are known to emit likely carcinogens including benzene and formaldehyde, and living near wells is linked to health problems including respiratory issues and preterm births, studies have found.

Yet storage tanks and oil rigs are hidden behind walls and nestled near homes, schools and youth clubs. Along with health risks, the active sites can bring around-the-clock noise for residents.

Petroleum was once one of Southern California’s biggest industries, with derricks and wells dotting coastal areas from Huntington Beach to Santa Barbara, extending to inland communities including Brea and Echo Park. The industry helped fuel L.A.’s growth in the early 20th century and later provided jobs for veterans after World War II, and also created some of L.A.’s great fortunes and scandals in the prewar years.

The region’s output is not what it once was, but there are still more than 1,000 active or idle wells in L.A., city officials say.

“Oil drilling in Los Angeles might have made sense in the early part of the 20th century, but it sure doesn’t make a lot of sense now that we’ve become a megalopolis at the beginning of the 21st century,” Councilman Paul Krekorian, who represents San Fernando Valley neighborhoods, said at Wednesday’s council meeting.

The motion approved Wednesday directs city attorneys to draft an ordinance that prohibits new oil and gas extraction. The city will also conduct an amortization study to understand whether oil companies have recouped the value of their investments at each oil site.

If companies have recouped those costs, L.A. officials say it will make it easier for the city to shut down the sites.

Rock Zierman, chief executive of the California Independent Petroleum Assn., said in a statement that “shutting down domestic energy production not only puts Californians out of work and reduces taxes that pay for vital services, but it makes us more dependent on imported foreign oil from Saudi Arabia and Iraq that is tankered into L.A.’s crowded port.”

Crude that is produced in California complies with state environmental laws, while imports are exempt, Zierman added.

The L.A. County Board of Supervisors last year took similar steps to phase out oil production in unincorporated areas. The state is moving toward banning new oil and gas wells within 3,200 feet of homes, schools and healthcare facilities, and requiring emissions monitoring of existing wells within those buffer zones.

More than half of the city of L.A.’s active oil wells are in Wilmington, according to Communities for a Better Environment, an environmental health and justice group. The group became involved in the neighborhood in 2007 after residents complained about a massive oil drilling operation run by Warren E&P Inc.

The operation is near homes and a youth baseball field, said Bahram Fazeli, director of research and policy at Communities for a Better Environment.

“It was terrible — people said it was a living hell,” Fazeli said, describing residents’ complaints of asthma attacks and nosebleeds. “It’s still a big hazard to the community.”

A drilling site run by Allenco Energy in University Park brought reports of foul odors, headaches and persistent nosebleeds. The site was ordered in 2020 to shut down permanently after years of legal and political wrangling.

The city has faced persistent criticism from activists for its lack of oversight of the petroleum industry. A 2020 investigation by The Times and the Center for Public Integrity found that the city of Los Angeles has been slow and inconsistent in forcing the petroleum industry to take responsibility for wells that sit idle and unplugged.

Read the complete article at latimes.com