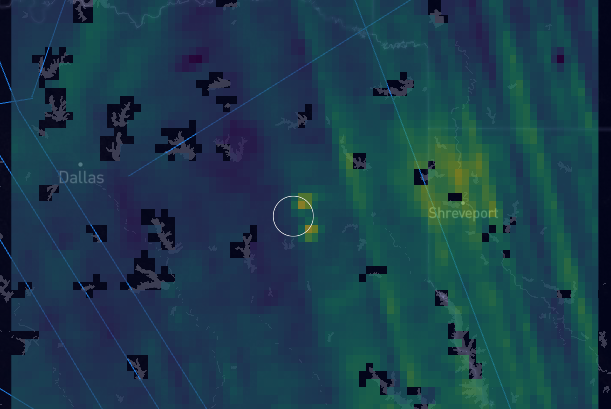 Re-post of original article from energyconnects.com

State regulators said they couldn’t identify the source of the methane, which is the primary component of natural gas and traps 80 times as much heat than carbon dioxide in its first two decades in the atmosphere. Stemming methane leaks and stopping unnecessary releases is one of the most powerful steps that can be taken to slow global warming.

The two plumes were detected by geoanalytics company Kayrros SAS using a Nov. 29 satellite observation from the European Space Agency. Kayrros estimated that the plumes originated from different sources east of Dallas, about 15 miles apart, in an area dotted with fossil fuel infrastructure.

The plumes had estimated release rates of 21 tons per hour and 24 tons per hour. It’s not possible to determine the duration of leaks because satellites only capture one moment in time. If they lasted an hour, the two clouds combined would equal the average annual emissions from about 800 cars running in the U.S.

Some methane plumes found by satellites can be tracked to specific sources, especially if a company reveals that it released gas at that location at that time. But without anyone stepping forward, the source of such plumes — where multiple companies are operating in a small area — can remain a mystery. On-the-ground monitoring is also sometimes used to link releases to specific producers.

Companies operating pipelines nearby include Boardwalk Pipelines LP, Enbridge Inc. and Atmos Energy Corp. Boardwalk said it didn’t have any leaks or releases that could have caused the clouds. An Enbridge representative said the company isn’t aware of any such release. Atmos didn’t respond to multiple requests for comment.

Texas regulators also weren’t able to identify the source of the methane plumes. The Texas Commission on Environmental Quality wasn’t aware of the plumes, a representative said. A spokesperson for the Railroad Commission of Texas, the primary state regulator of the oil and natural gas industry, referred questions to the TCEQ.

Read original article and more like it at energyconnects.com

Terra-Petra’s oil field services offer our clients a one-stop shop for all their oil field needs.  Our team will manage your project from start to finish, encompassing everything from initial consultation to the final report and submission of NFA (No Further Action) letter.

With the seemingly endless moving parts involved in successful oil field construction site plan review, oil well abandonment / re-abandonment, vent cone installation, consulting and more, it’s important to have an expert by your side every step of the way to manage the process and make sure your budget and schedule stay on track.  With Terra-Petra’s hands-on expertise in ALL aspects of oil field management and consulting we stand out amongst other firms in the industry.