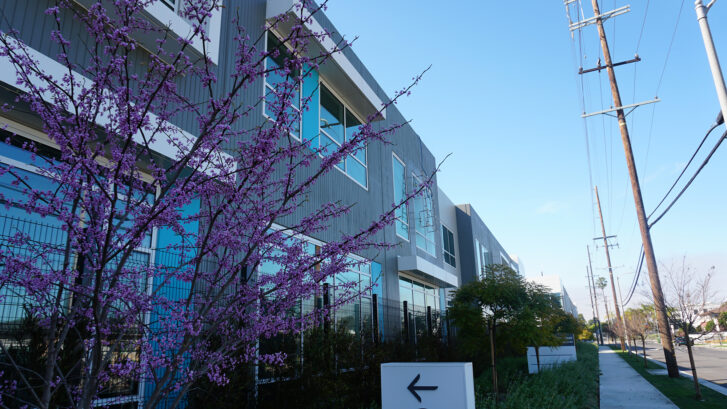 Testing is covering select areas across the entire building enclosure systems including the windows, storefront, curtain wall systems and roof systems The request for the testing was driven by the proposed tenant of the building. The developer engaged Terra-Petra based on our experience, reputation, and familiarity with the buildings.

The scope of work includes performing ASTM E1105-08 Modified, and/or AAMA 501.2 Modified. Our services covered industry standards for Testing and Reporting as specified in standard Specification Sections relative to these systems.

We are also providing technical consulting services to be carried out by Terra-Petra’s Principal Waterproofing Consultant to assess root causes for water intrusion that occurred at the building interior during the water testing efforts. We are currently writing up our recommendations for repairs in the few areas where water did migrate through the building enclosure systems.

Terra-Petra utilizes the latest technology, materials and techniques for conducting site inspections and field testing of fenestration system assemblies. We are an AAMA accredited test agency that is able to carry out air and water performance testing of building envelope assemblies during both the mock-up and installation phases. Terra-Petra provides field testing in compliance with ASTM E-1105-00, ASTM E-783-02 and AAMA 502 standards. 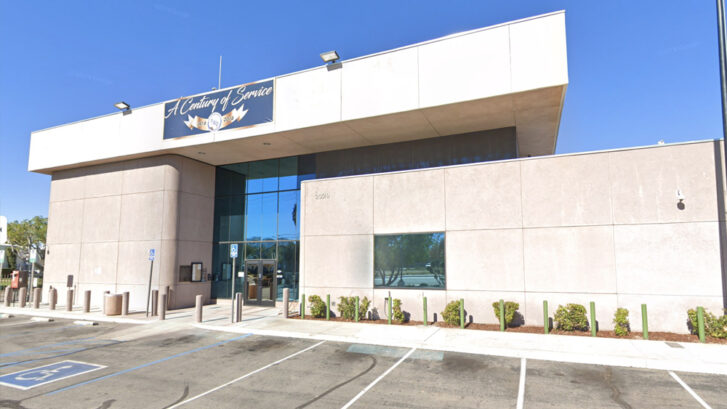 Multiple areas of historic moisture intrusion throughout this structure indicated failures at the stucco panels. The PWD Main Office was originally built in 1992 and over the years the existing stucco panels pulled apart from the building creating a safety issue. There are several theories as to why the stucco panels separated from the structure, and we assumed that it was poorly constructed. The District sought an expert to provide an evaluation of material options to replace the existing exterior stucco wall system. 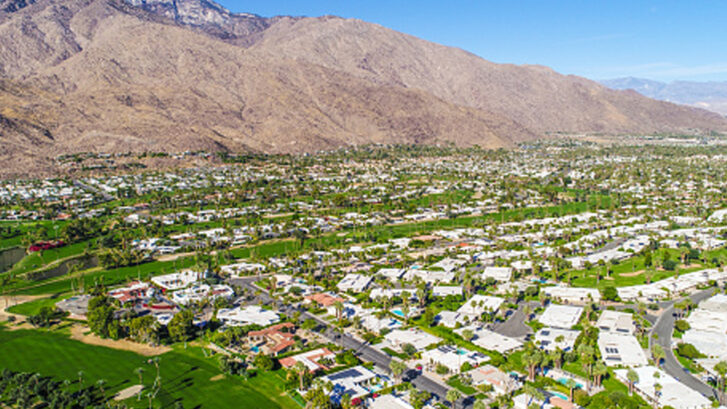 Terra-Petra Waterproofing Division has accepted the task to provide building envelope weatherproofing consulting services for the design of a high-end mixed used building in Palm Springs.  The new development will consist of the construction of a 6-story building, w/ roof deck, having 45-units. There will be a single subterranean parking level.

The scope of work includes consulting on the waterproofing systems by providing both a systems recommendation letter (Basis of Design) and by redlining the project plans relative to the building enclosure system for the Construction Document (CD) phase of the project. 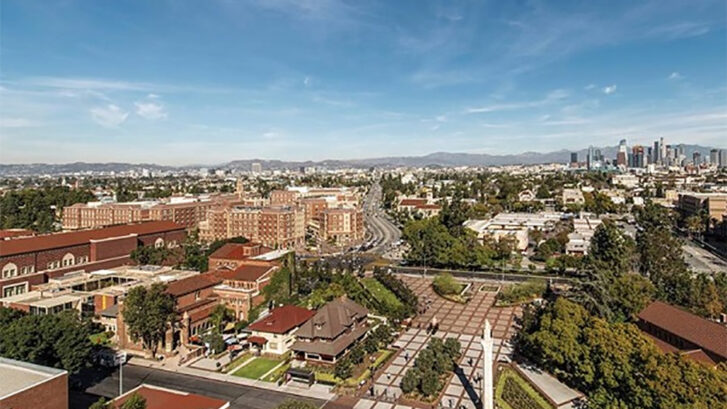 Terra-Petra Environmental Engineering is pleased to have been contracted to conduct a forensic waterproofing assessment of historic water intrusion issues for a building located on the campus of University of Southern California (USC).

We have been informed that there are multiple areas of historic moisture intrusion along the basement wall below areas of proposed pathway improvements at the site. The entire side of the basement has cracks on the wall that need repair; water proofing issues, and many utility penetrations with large cracks will need to be addressed. Terra-Petra shall assess the water intrusion issues and make recommendations to address these issues. 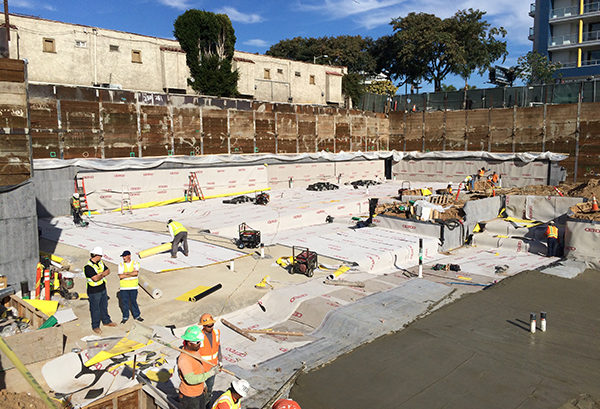 In concrete, there are voids and cracks that waterproofing systems must compress against to be functional. This is relevant, particularly regarding poorly consolidated substrates which is inherent to shotcrete.  Swellable membranes such as Bentonite often do not achieve the 24 lbs. of compression per square foot required to achieve watertight functionality, when installed in conjunction with shotcrete.

When it comes to saving construction costs by using shotcrete at below grade vertical conditions, in lieu of cast-in-place concrete, we advise using some of those consequential savings towards a waterproofing system that can accommodate the inconsistencies inherent with blown concrete. Even the best nozzlemen cannot guarantee that voids will not be left behind.

A High-Density Polyethylene (HDPE) membrane with taped seams, used in conjunction with a bentonite option (that has the capacity of bridging in a watertight manner the poor compaction and consolidation areas that are acceptable structurally but inherently problematic from a waterproofing standpoint), is a predictable way to get watertight performance results with shotcrete applications.

Contact Terra-Petra today for a consultation on our waterproofing consulting, testing and inspection services. 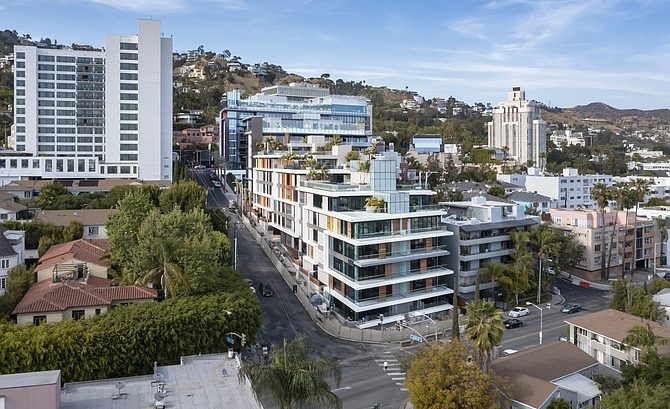 Re-post of original article from labusinessjournal.com

The long-awaited Pendry, a large hotel and condominium development positioned on the Sunset Strip at the site of the former House of Blues, has partially opened.

The property’s 149 hotel rooms started taking reservations April 2 while its 40 condos are slated to open in June.

Clad in digital billboards, the eye-catching complex is located at 8430 Sunset Blvd. in West Hollywood and holds two restaurants from Wolfgang Puck, Ospero and Merois, which are also open.

Marcy Schulte, a principal with Cuningham, which executed the project, said Pendry is benefiting from rising vaccination rates. “There’s a lot of pent-up demand and energy around getting back out,” she said.

Schulte added that the property’s residences are also seeing a lot of interest. “We’re expecting that, with vaccines coming online, and the more and more we know about it, that it will start to look more familiar in terms of the way people are socializing,” she said.

Even though the project was erected during the height of the pandemic, it didn’t have to undergo many changes in terms of land-use and design. “There’s some adjustments in terms of intensity and density of usage but really pretty minor,” Schulte said.

Read the complete article on labusinessjournal.com

Terra-Petra is thrilled to have been a part of this fabulous The Pendry Hotel project. Terra-Petra served as the Quality Assurance/Quality Control Waterproofing Inspectors throughout the entire construction process. We are also in the process of completing the QA/QC Fenestration Testing at the Residence in compliance with the project’s performance specifications.

Read more about Terra-Petra’s work on the project here 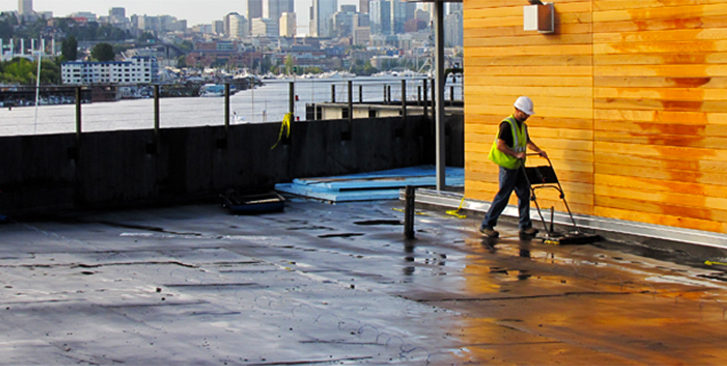 Terra-Petra’s waterproofing division has been engaged by a leading Southern California contractor to conduct a forensic assessment of historic water intrusion issues for an existing building near LAX.

Unfortunately, we are not at liberty to discuss the project in detail, or disclose our client’s name as we are bound by an NDA, but we can say that the building in question is a single-story warehouse type structure with an approximate footprint of 100,000 SF.

Complete due diligence research on all existing buildings plans, specifications, reports, waterproofing submittal packages, photos and as-built drawings (if any of these exist). We want to be able to wrap our head around everything that has been completed to date, in order to better understand contributing factors that could have led to the failure in the waterproofing assembly.

Our investigators then conduct site walks where they perform non-destructive testing in compliance with ASTM 2128-12: Standard Guide for Evaluating Water Leakage of Building Walls. This will usually include a visual inspection and the use of thermal imaging equipment and moisture meters, among other tools, to carry out the assessment work.

The forensic investigators will meet with on-site personnel, take notes and photo document conditions in order to prepare summary with our findings, options and recommendations for addressing the water intrusion matters. Sometime the non-destructive testing is not able to identify the source of the failure. In these cases, we are able to move through a destructive testing process where claddings are removed to expose the underlying conditions for the investigators. Possible testing strategies may include water testing following ASTM/AAMA standards either with or without static pressure, flood testing with colored dyes or visual inspections. Each condition is analyzed on a case-by-case basis to determine the most appropriate strategy.

At Terra-Petra we do not believe in “patches” or “band aids” when it comes to repairing failures in the waterproofing assembly because quite honestly, they just don’t work…one must get to the root cause and make repairs at that level, to stop the leak.

Our forensic team has a high degree of success in identifying root causes of water intrusion issues by following the process outlined above.

Contact Terra-Petra today to get started or get a consultation on your own waterproofing project needs. 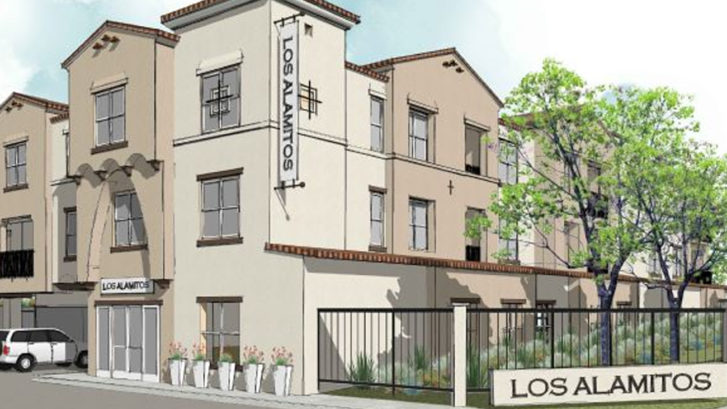 The scope of work includes the waterproofing systems being installed at the windows, doors, building wrap and roofing.